This PhD research project ran from 2015-2020 and was funded by the EPSRC and AHRC Centre for Doctoral Training in Media and Arts Technology (EP/L01632X/1). The full thesis document can be found here.

The health, social and psychological benefits of music making have long been recognised, and well researched in the fields of music therapy, neuroscience, psychology, sociology and other disciplines. For disabled people, opportunities to partake in music-making activities can be impeded by social, attitudinal and physical barriers. The lack of instruments accessible to people with disabilities is one such barrier to access. ‘Accessible Instruments’ is the term used here to describe instruments which are designed specifically to accommodate the access needs of disabled musicians.

Many accessible instruments, particular those seen in academic research, place a focus on the therapeutic, rehabilitative or otherwise medical benefits of music-making. Often, the intended outcomes of a user’s encounter with these instruments is to see an improvement in an underlying condition, such as improved muscle control following a stroke, or to illicit a therapeutic sensory response in children with profound and multiple learning disabilities (PMLD).

This research has seen the development of a number of instruments for use in lab and field studies. These include the The Adapted Bass Guitar and The Strummi

The Adapted Bass is the result of a collaboration with the One-Handed Musical Instrument (OHMI) Trust. Over the course of a 6-month research placement, we developed a system for mechanically fretting the strings of a bass guitar using an external controller. The brief was to design an instrument to submit to the OHMI Trust’s annual competition, which specifies entries which can be ‘played without the use of one hand and arm’. Like most instruments, the bass guitar requires two hands to play, and so the first major design problem was to decide which hand to ‘replace’: the fretting hand or the plucking hand. Before designing the adaptation, we conducted a survey of bass guitar players to assess their most-valued features of bass playing, and which hand those features relate to. We found that for bassists, performance elements relating to rhythm, timbre, timing accuracy and dynamics were generally more important than note choice and articulation. This lead us to design a mechanical fretting system, preserving the role of the plucking hand as much as possible.

Our final prototype design had some technical and usability demonstrations, but was useful in demonstrating the extent to which an instrument can be modified and adapted before it loses its identity. Despite a large portion of bass playing technique becoming mechanised, the adapted bass remained recognisable as a bass guitar. This lead us to think about the ways that an instrument’s overall aesthetic qualities (global form) and the more micro-level details of interaction (interaction modality) affect a player’s perception of the instrument’s musical acceptability.

The Strummi is a plucked string digital instrument, based on the Karplus-Strong plucked string modelling algorithm. By exciting the algorithm with a real-time audio input, from individual dampened strings, we achieve a relatively realistic sounding and expressive plucked string sound.

Following from our reflections on the effects of global form and input modality, we designed four variations of the Strummi, intended to embody different design aspects of varying proximity to the guitar. We varied the global form in two ways: a tabletop form, based on boutique electronic music hardware, and a guitar form, designed to be held and played in a similar position to a guitar, with a body and buttons placed on the neck. We also varied the interaction modality, using either the dampened strings, or a touch-sensitive sensor. These four variations give us two pairings of instrument: a congruent pairing, where the form and interaction modality both match either that of a guitar or an electronic music device, and the incongruent pairing, where these elements are mixed-and-matched. 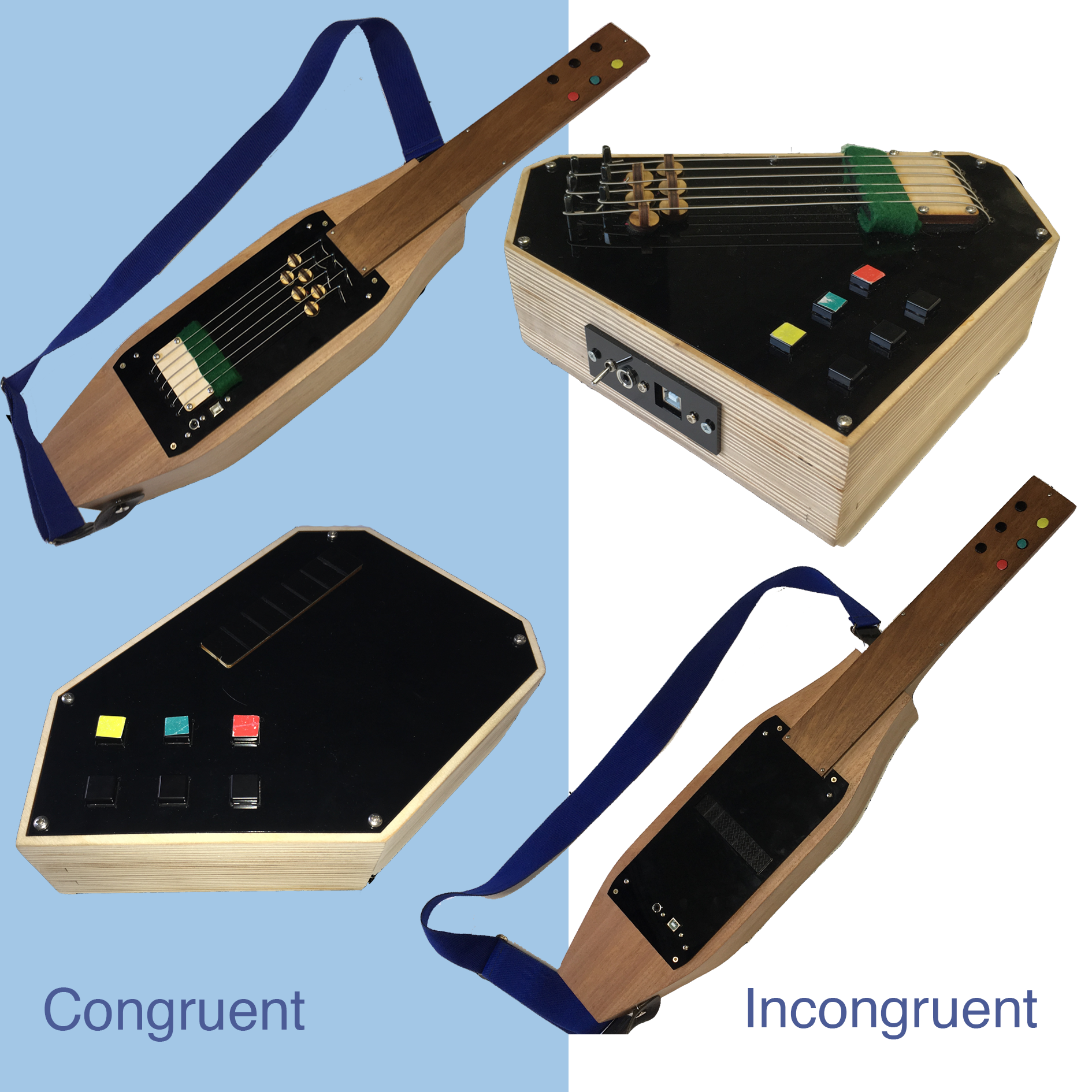 The Strummi as an Accessible Instrument 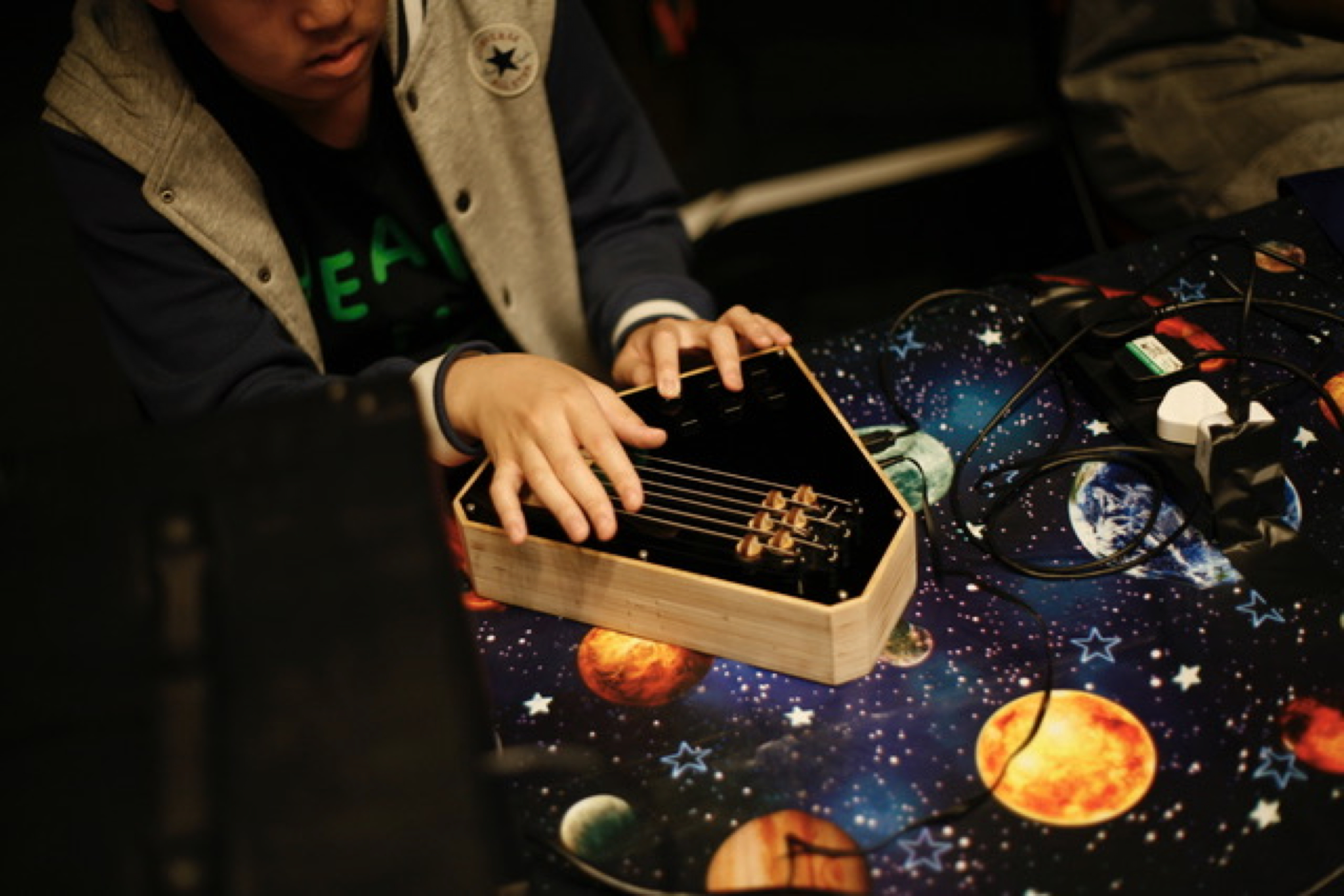 The Strummi in both tabletop and guitar form has been used during sessions with Heart n Soul, a creative arts charity for people with learning disabilities. This is a long term study, designed to explore the role of instrument design in removing barriers to music making for people with learning disabilities, and how to preseve the social role of existing instruments such as the guitar in this context.

We updated the Strummi’s design to include eight silicon buttons, and built two new versions: including another guitar-shaped design, based on a Les Paul body and built with the same materials as the tabletop version, and the “GibStrum”, which is a modified Les Paul copy, with buttons installed at the top of the neck and the Strummi hardware in the body.