With the advancements in digital audio technology, digital musical instruments (DMIs) are now being designed of all shapes and dimensions. Now that more production is taking place in the home, commercial synthesizer companies are releasing smaller and smaller desktop DMIs, but how do we know what is being lost by scaling down instruments?

The motivation of this research is to understand the influence that a DMI’s physical size and layout has on the performances and compositions created on DMIs, so as to discover ways that DMI designers might make dedicated choices to either support or suppress specific influences in future DMI design.

Performers of large acoustic instruments have long known the ways the different sizes affect performance and the repertoire created for these instruments. If we consider the flute family - the piccolo, concert, alto and sub contrabass flute - the size of these flutes result in a different performer experience, and we know there are musical cultures around these instruments. While some performers can play all of these instruments, some very much prefer the largest ones. And so what is the largest version of the instrument offering? What do these performers know about size, and what can DMI designers learn from this knowledge?

We interviewed seven performers of large acoustic instruments, such as contrabass flute, tuba and gyil, and asked them questions designed to reveal how the size of the instrument relates to the compositions and performances created on those instruments.

The findings revealed that large instruments are not just scaled-up versions of small instruments - they are different instruments resulting in their own unique repertoire. Beyond being larger and heavier than their smaller counterparts, large instruments have musical affordances not available on the smaller versions, such as timbral variation across registers, and the ability for microscopic gestures to result in a large sonic effect on the overall tone and performance. This study informed the design choices for a family of new oversize and desktop-size instruments to be used in future large DMI research. 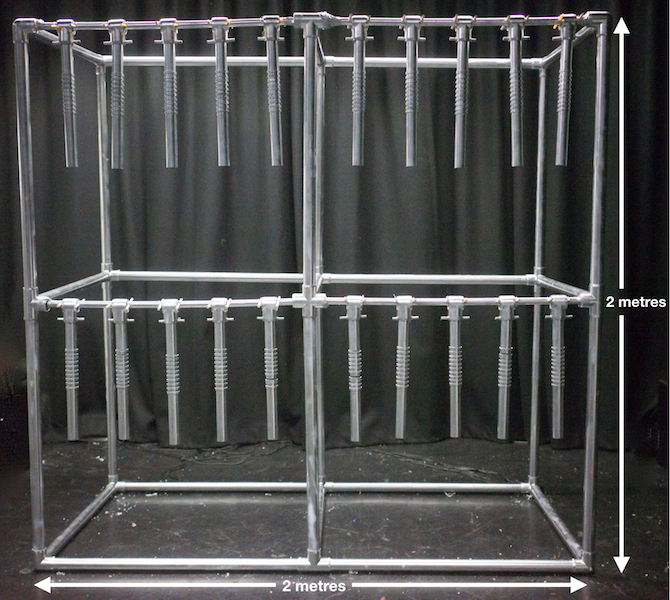 The development of idiomatic gestural languages on large DMIs

The development of idiomatic gestural languages on large DMIs

When performing with new instruments, musicians often develop new performative gestures and playing techniques. Music performance studies on new instruments often consider interfaces that feature a spectrum of gestures similar to already existing sound production techniques. But we were interested in learning about the choices performers make when creating an idiomatic gestural language for an entirely unfamiliar instrument.

Informed by the findings of the Large Acoustic Instrument Performers Study, we designed a musical interface with a unique large-scale (2 metres by 2 metres) layout to encourage new performers to create fully original instrument-body interactions. We conducted a study where trained musicians were invited to perform one of two versions of the same instrument, each physically identical but with a different tone mapping.

The study results reveal insights the roles that sound design, tonal layout and instrument size play in how musicians develop novel performance gestures when encountering a new instrument characterised by an unfamiliar shape and size. Interestingly, while there is an influence of sound design on performance techniques, the idiomatic gestures and patterns that emerged seem to be strongly dependant on the relationship between the instrument’s physical layout (a combination of the tonal layout and size), and the human body, resulting in strong influence on the improvisations created and moreover even leading to the musicians perceiving the sound differently.