TouchKeys adds capacitive multi-touch sensing to the surface of the piano keys.

TouchKeys is a new musical instrument transforming the piano-style keyboard into an expressive multi-touch control surface. The TouchKeys sensors can be added to the surface of any keyboard, using capacitive touch sensing to measure the location of the musician’s fingers on the keys during performance.

The project was launched on the crowd-funding website Kickstarter on 29 July 2013 and successfully finished its campaign on 2 September 2013. The campaign raised funding to build sets of TouchKeys that any musician can install on their own keyboard. They shipped by the end of January 2014, and a second production run completed in 2015. In 2016, the project spun out into an independent company, TouchKeys Instruments Ltd, which sells kits and instruments to musicians worldwide.

TouchKeys adds capacitive multi-touch sensing to the surface of any piano-style keyboard. Sensor overlays measure the location and contact area of the player’s fingers on the key surfaces, and the data can be used to create a wide range of expressive effects including vibrato, pitch bends, timbre changes and improved emulations of non-keyboard instruments. The keyboard is traditionally a discrete interface, measuring notes by onset and release. The TouchKeys let the player continuously shape each note through the subtle expressive details of their finger motion. 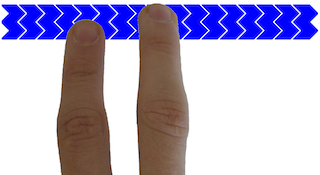 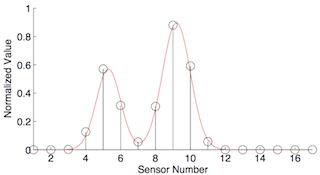 Simulation of touch location calculation in a single axis

The sensors work by measuring the capacitance of a collection of small conductive pads on the surface. Touching the key causes several adjacent pads to increase in capacitance. A microcontroller on the key interpolates between the values to arrive at a precise estimate of the contact location. Contact area can be sensed by observing the overall magnitude of change in capacitance.

Once each key has calculated its touch information, another microcontroller collects the data from every key and transmits it to a computer by USB. Software on the computer side generates OSC and MIDI messages that can be used by a wide variety of synthesis software. The software also uses the MIDI data from the underlying keyboard to produce a complete picture of the performer’s actions.

More information on the design and operation of the TouchKeys can be found in the papers below:

A. McPherson and Y. Kim. Design and applications of a multi-touch musical keyboard. Proc. Sound and Music Computing, Padova, Italy, 2011.

A. McPherson, A. Gierakowski and A. Stark. The space between the notes: adding expressive pitch control to the piano keyboard. Proc. ACM Conference on Human Factors in Computing Systems (CHI), Paris, France, 2013.

The TouchKeys are sensor overlays that attach to any standard-size keyboard, acoustic or electronic. Each key uses capacitive touch sensing to precisely locate one or more fingers on the key surface. Here are a few of the main features:

During the Kickstarter campaign, we created over 10 videos demonstrating different applications of TouchKeys which are available on the YouTube channel. Here is a selection of those videos:

During the Kickstarter campaign and its subsequent commercial launch, TouchKeys was the subject of over 25 press articles. A full list can be found here; a selection is below: