PhD project by Giacomo Lepri. The research was funded by the EPSRC and AHRC Centre for Doctoral Training in Media and Arts Technology at Queen Mary University of London (EP/L01632X/1). The full thesis document can be found here.

Artists and technologists working with digital musical instruments (DMIs) draw influence from diverse disciplines, tools and perspectives. Musical artefacts are shaped by aesthetic values as much as research concerns and design methods. These elements might vary considerably, depending on the specific community of practice and context out of which a given music technology emerges. Digital tools themselves draw on technical knowledge which is built around cultural assumptions and musical expectations.

The working hypothesis behind this project is that, while assembling an instrument, music makers are engaged in a complex negotiation comprising the values and representations inherited from particular socio-cultural environments and the patterns suggested by the digital tools and materials at hand. This research explores some of the modalities through which musical ideas are inscribed in and mediated by musical interfaces.

Research structure: three empirical investigations. The first outlines a value discovery exercise exploring the breadth of perspectives musicians active in different contexts might have while speculating on the design of not-yet existing musical instruments. The second considers a selection of digital tools, examining the musical notions they promote and how these influence the composition of sonic interactions. The third reports a set of cheerful and open-ended design explorations conceived to elicit and make manifest highly personal design knowledge and visions.

On musical cultures and communities of practice

To explore how diverse musical backgrounds might influence the understanding of music technology we ran a value discovery exercise exploring the breadth of perspectives different communities might have in relation to the values inscribed in fictional technologies for musical interaction. We conducted a hands-on activity in which musicians active in different contexts were invited to envision not-yet-existent musical instruments. The outcomes revealed several sources of influence on participants’ artefacts, including cultural background, instrumental training, and prior experience with music technology. Overall the research highlighted the importance of cultural awareness and value rationality for the design of interactive systems within and beyond the musical domain.

As If By Magic workshop

Our work builds on Kristina Andersen’s Magic Machines workshops in which the notion of Magical Unknown is exploited to free a participant’s imagination and generate manifestations of unknown technologies. Our workshop is therefore based on the idea that “embodied making processes facilitate a different form of thinking”. Through the act of building, narratives entailing the maker’s intentions, motivations and feelings can emerge. However, compared to the work of Andersen, our approach is more focused in the emergence of existing musical values and instrumental concerns, rather then provoking new disruptive ideas and designs. 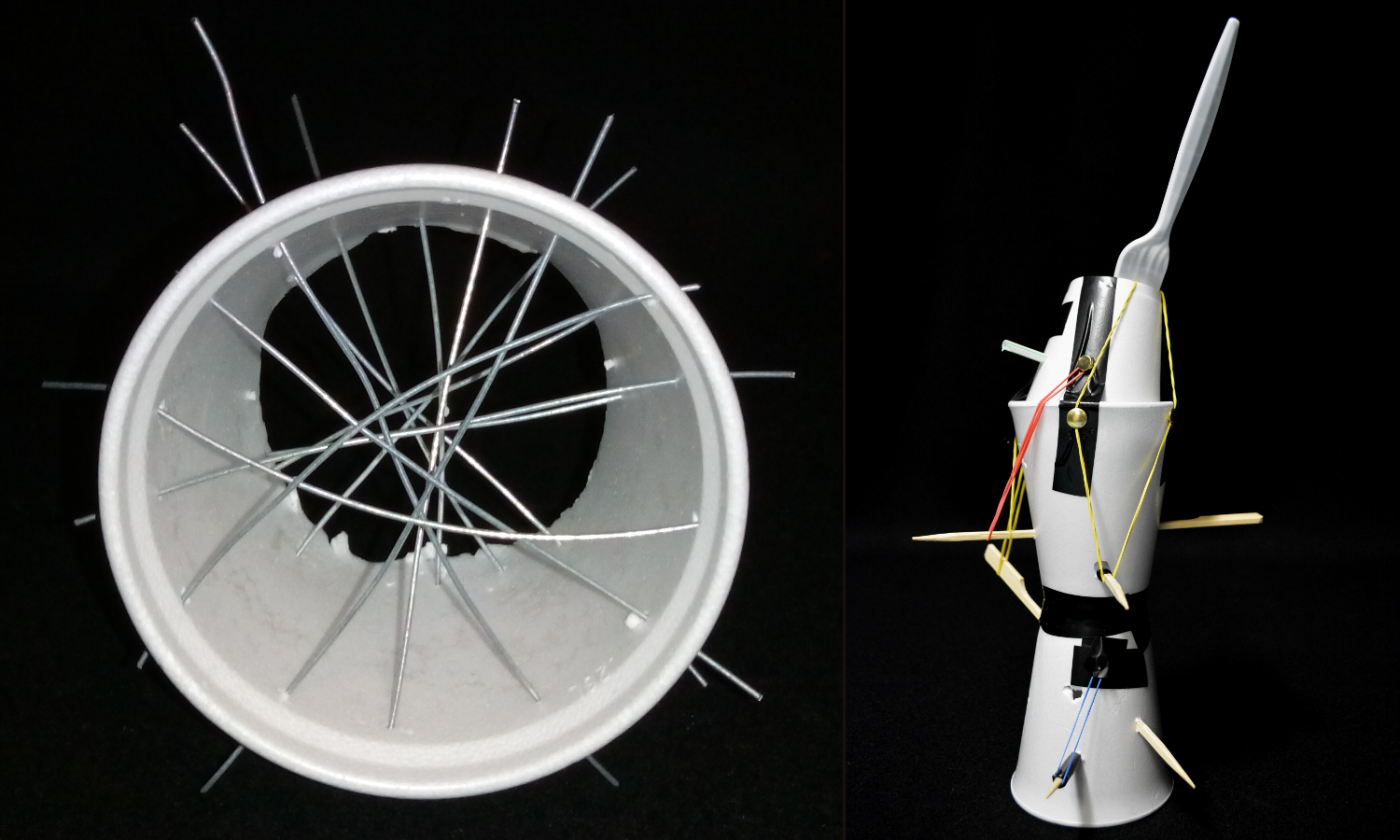 From left to right: (1) AntennaLele - an ukulele like instrument with a bendable neck. The designer focused on the alteration of a specific element (guitar neck) in order to accurately “shape harmonies and melodies”. (2) SonicAlarm - a wire based instrument with attachments to be loosely hooked to both upper and lower limbs. The artefacts emphasises the notions of low control and stochastic behaviour. (3) No name - A string instrument that can only play notes with prime number frequencies, to produced “optimally dissonant” sounds. (4) Space Vibrator - a “plinky sort of instrument” (i.e. a funny string instrument) that turned out to be a really badly made spaceship.

From left to right: (1) Orchestra - the conductor interacting with a musician of the orchestra. In this artefact the instrument disappears (transparent mediation technology) and the ideas of communication and interplay are privileged. (2) CorpoSuono - An organ like instrument with tubes filtering the air and a stopper to close them. The artefact focuses on the notion of timbre manipulation.

We then ran an online survey targeting musicians and technologists with experience in musical interface design. We recruited the participants using academic mailing lists (NIME and SMC) and social networks. We aimed to see if respondents could discover musical values through the artefacts created during the various As If by Magic workshops and link them to specific aesthetics and communities. Survey participants reviewed an image of eachfictional instrument and a short description of it provided by its creator. The survey asked the following open questions:

Overall, our participants were rather successful in guessing the genre/style of the artefacts’ creators: 44% of answers were correct, and a further 27% partly correct. In particular we were impressed by the overall ability of the survey respondents to discover the multiplicity of cultural sources and musical practices in the designer’s background. Besides technical expertise, the design of a music technology entails the materialisation of purposes, assumptions and values. These are situated factors, emerging from specific communities, contexts and cultures. This research provides us the possibility to engage with this type of knowledge: context-dependent values emerging from situated practices.

On digital music tools and materials

Digital music tools are often depicted as pliable vehicles which provide access to audio manipulation at various levels, from primitive operations to predefined musical abstractions, allowing musicians to create a great variety of sonic structures. In principle such openness of expression ought to lead to rapidly diversifying musical ideas. However, new digital musical interfaces and instruments often (dis)play similar aesthetics and interactions. For instance, attendees of NIME concerts will encounter a recognisable prevailing (though by no means universal) aesthetic, often including drones, textured noise or manipulated samples. Most of the music produced with popular digital audio workstations is instead based on wester tuning systems, fixed tempo and looping patterns (mainly 4/4). If technology opens up the possibility to produce any imaginable sonic interaction, what explains this clustering?

The study closely examines the creative work of 16 music technologists to better understand the cultural dynamics (e.g. pedagogical habits and shared aesthetics) and technological trends (e.g. the spread of specific music tools) behind the standardisation of digital music production.

To explore the aesthetic influence of specific music technologies, we created a musical game based on the composition of simple DMIs. The activity is conceived as a playful hands-on exercise in which music technology practitioners are invited to design sonic interactions using the Pd language and a basic hardware interface.

Participants were provided with a breadboard containing three sensors commonly used in DMI design: a pushbutton, a potentiometer (with knob attached) and a FSR. Our compositional exercise requires two participants at a time. For each game, two instruments are designed and participants work on both instruments.

Our findings show a clustering of stylistic approaches and design patterns which relate to Pd workflow, sensor interpretation and sonorities produced by the instruments designed. Most notably, our musicians relied on a reduced selection of sound sources in Pd. Furthermore, they often designed direct and memoryless interactions and mappings between sounds and sensors.

We could also appreciate different socio-cultural influences linked to makers’ techno-musical backgrounds. For instance, musicians active in different contexts and with different techno-musical skills offered almost opposite views on what is “original and unconventional” in digital instrument design.

The investigation focuses on the individual perspectives brought in by practitioners engaged in the design of digital musical instruments. We organised two activities organised around the themes of absurd musical interfaces, questionable sonic interactions and unworkable music designs. These research gave us the opportunity to explore a set of strategies to make manifest designer’s personal attitudes and views. As a result, we suggest absurd making as a playful, yet powerful, tools for the discovery of subjective techno-musical knowledge and visions.

By framing their own notion of musical absurdity, musicians implicitly engaged in critical making process through which ideas and representations linked to cultural contexts, as well as previous experience with music technologies, are displayed and reassessed. Absurd making as a lighthearted approach to (un)veiling personal design perspectives and support critical making. This permissive and open-ended attitude allows for the emergence of creative obstructions which question technological assumptions, musical practices as well as the perception of the familiar and the domestic. 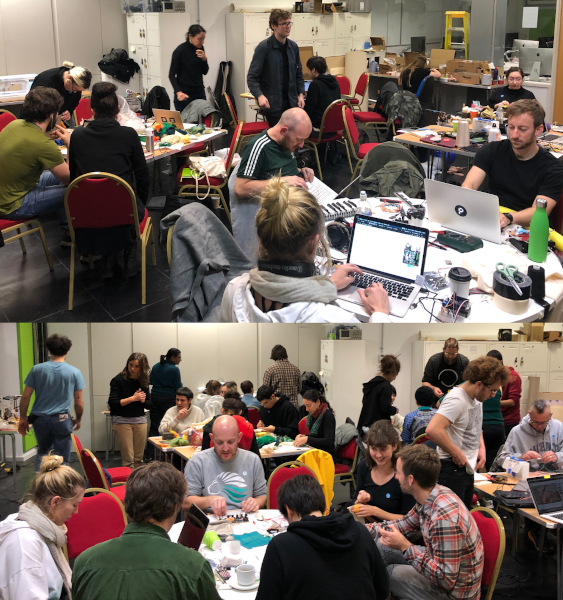 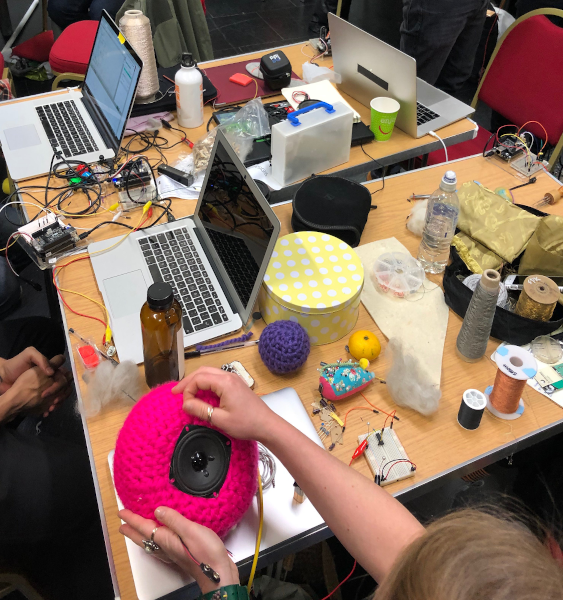 See the hackathon call for participation

Artists, technologists and makers took part in a two days hackathon around the themes of absurd musical interfaces, questionable sonic interactions and unworkable music designs. At the core of the project was the intention to explore absurd making as a way to support critical and disruptive design practices. The event offered a valuable framework for discussions on the use and development of musical interfaces, interaction paradigms and design tools. In fact, many of the projects convey implicit criticisms towards existing technology. It is possible to find here more info about the Unuseless Music Design Hackathon.

See the workshop call for participation

The 10.000 Instruments workshop is a collaborative online format to generate unconventional interface ideas and speculate on music technology through open-ended artefacts and playful design explorations. The make-believe, whimsical and troublemaking approach to instrument design adopted in the workshop is conceived to support individuals’ creativity, unlock shared musical visions and reveal unconventional perspectives on music technology development. It is possible to find here all the impractical musical ideas gathered during the NIME 202 workshop.